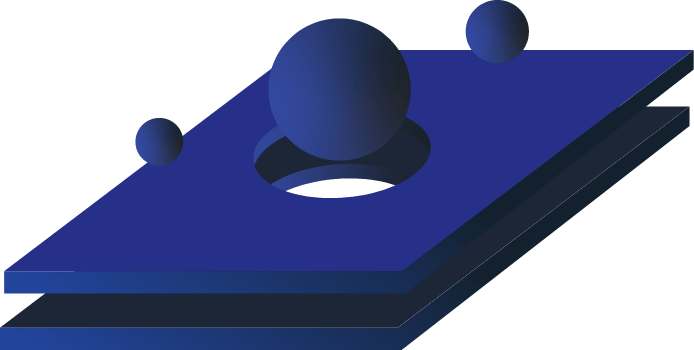 The feed, at low density, is pumped into the feed hopper where suspended solids settle to the bottom while excess liquor overflows and returns to the process. Solids are carried through the nozzles by injecting saturated liquor, generally filtrate. The magma, formed of solids and liquor, strikes the spreader apron and flows over the feed dam. Baffles focus the feed stream onto the surface of the drum. As the drum rotates, the liquor enters the internal sections after being sucked through the filter medium, on which the solids are continuously deposited as a uniform, porous cake. The cake is washed to displace mother liquor, then moves into the heat zone, where much of the wash water is removed mechanically, and the remainder is heated to the boiling point.

Drying now takes place, followed by removal of the outer dry crust by the intermediate scraper blade, allowing the thinner, partly dried cake to travel through the final part of the drying cycle. The cake is then completely removed by the final scraper. Sprays clean the filter medium and the cycle is repeated.

The process of separating solids from liquids embraces a wide variety of problems and materials, from colloidal suspensions to magmas containing coarse crystals which settle so rapidly that it becomes difficult to maintain a uniform suspension of the solids by means of mechanical agitation.

In general, any suspension in which the solids settle readily can be filtered on top-feed filters and hence, they are limited to coarse, rapid-settling crystalline solids especially when the solids are to be dried on the filter and when washing is not especially important. Top-feed filters should not be used if a turbid filtrate is objectionable.

Wire cloth or perforated plate is usually used as the filter medium with top-feed filters. The metal should be selected with a view to avoiding erosion and corrosion. The size of openings in the filter medium depends to some extent on the size of particles in the magma. If the magma is fed to the filter at a higher density, these openings can be considerably larger than the largest particles in the magma, even though very small particles are present in a graded mixture.

Coarse crystalline solids form an exceedingly porous filter cake through which large volumes of air can be drawn, still maintaining a comparatively low vacuum in the system. Vacuums of 2 to 2.5″ Hg, with exhauster capacities of 150 CFM of air at 70 ºF per sq. ft. of filter area, are not uncommon. By preheating such large volumes of air, the material can be discharged in a completely dry state. For any given material, the temperature of the air to the filter varies with volume per square foot of filter area.

The vacuum depends on the size and characteristics of the crystals and increases as the porosity of the cake decreases. The curve chart shows the general relationship for exhauster displacement and air temperature for cakes of various porosities as indicated by the vacuum. It will be seen that as the vacuum increases, the temperature of the air increases and the displacement decreases. Therefore, each problem must be considered from several angles before the optimum operating conditions can be determined.

If the air to the filter is heated directly with gas or oil, the products of combustion will be mixed with the air. However, clean air can be delivered to the filter by using indirect heaters. Also, steam coils can be used if comparatively low-temperature air will accomplish the drying. Direct-fired heaters are about 95% efficient, while indirect heaters have a thermal efficiency of only about 70%.

The capacity of the top-feed filter depends on operating conditions and on the characteristics of the materials handled. Cake thickness ranges from 1/2 to 1-1/2 inches and normal drum speeds vary from 1/2 to 2-1/2 rpm. In general, when a bone-dry cake is to be delivered, capacities range between 100 and 900 lb. per sq. ft. of filter area per hour. Higher capacities are possible if only partial or no drying is required.

The overall thermal efficiency of the top-feed filter depends upon the uniformity of the aggregate in the cake, uniformity of cake formation on the filter, temperature of the air used for drying, and rate at which the hot air used for drying is drawn through the cake. All these factors are controlled in any well-engineered installation. A high thermal efficiency is obtained in the top-feed filter because much of the liquor is removed from the cake mechanically during the heating period.

The uniformity of the aggregate and of the cake itself and the tendency toward cloth blinding all are related to the feed density. Swenson top-feed filters definitely control the feed density by starting with a magma of maximum density and providing only sufficient dilution to cause the magma to flow.

The capacity of the top-feed filter depends on operating conditions and on the characteristics of the materials handled. Cake thickness ranges from 1/2 to 1-1/2 inches and normal drum speeds vary from 1/2 to 2-1/2 rpm. In general, when a bone-dry cake is to be delivered, capacities range between 100 and 900 lb. per sq. ft. of filter area per hour. Higher capacities are possible if only partial or no drying is required.

The liquor in the cake, during heating with hot air, becomes more highly saturated with the salt. As this liquor evaporates, the crystals on the surface of the cake tend to become cemented into a crust which is removed by an intermediate scraper to expose a fresh semi-dried surface to the hot gases and also leaves a thinner cake, thereby allowing a faster flow of hot air through the cake during the final drying part of the cycle.

The highly concentrated liquor produced by the heating of the cake finds its way into the meshes of the filter medium, on which a hard crust is formed by the evaporation of this liquor. In some cases, this crust can be broken up with a spray of filtrate or brine under pressure, but generally a light spray of water is necessary. Water so used finds its way into the system and must be considered in subsequent operations.

The Swenson top-feed filter is available in standard sizes

Swenson filters can be adapted to your individual problem.

Since every filtration problem requires special treatment, the success of any installation depends largely upon the skill and experience of the equipment builder. In some cases, a thorough knowledge of the interlocking operation will enable the supplier to recommend equipment and process changes that entail substantial economies.

The extensive experience of Swenson in the design, construction and operation of top-feed filters (as well as evaporators, crystallizers, and dryers which are often used in conjunction with filtration) makes Swenson especially well qualified to help solve your individual needs.